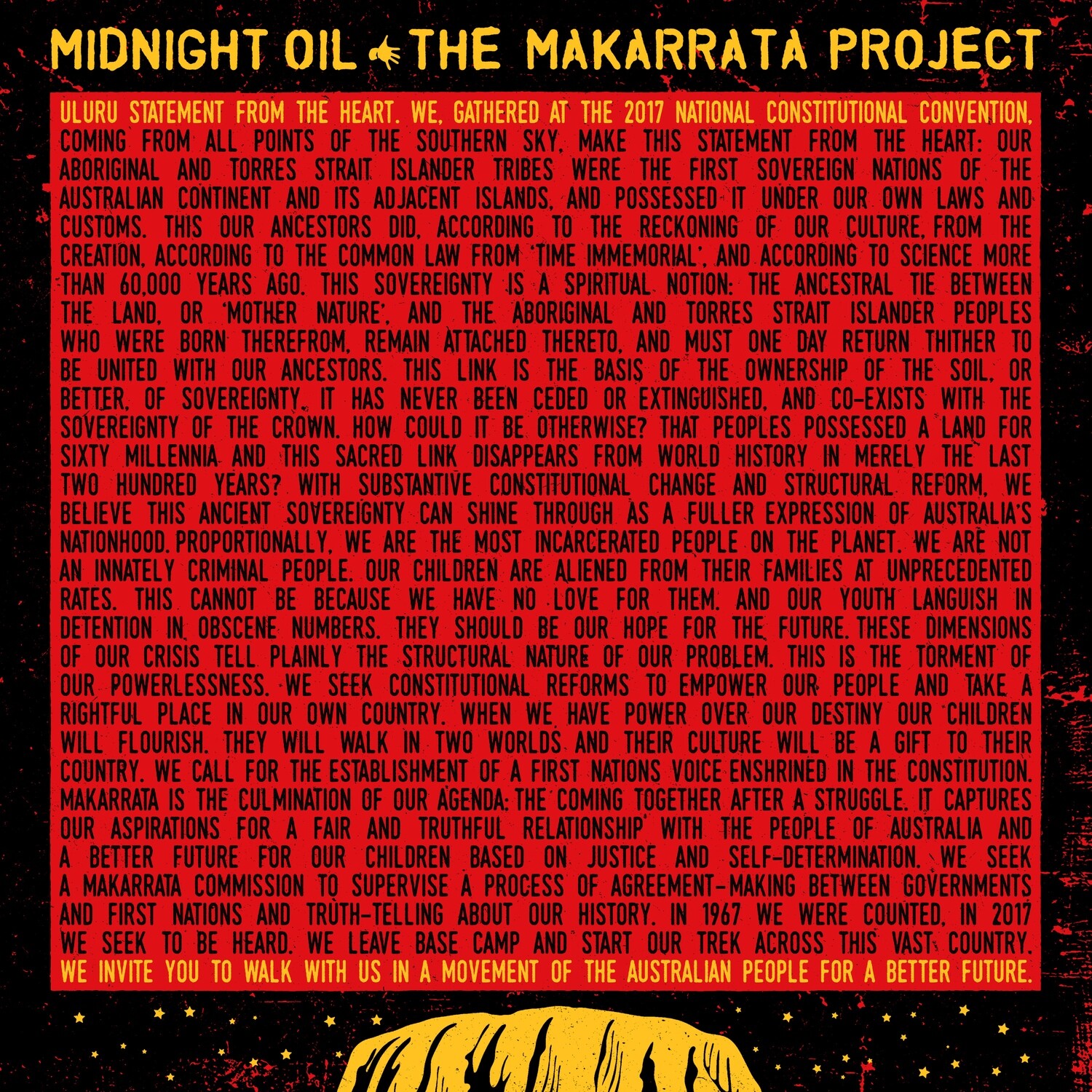 SKU 0194398099712
AU$38.00
In stock
1
Product Details
THE MAKARRATA PROJECT was produced by long-time collaborator Warne Livesey who also helmed legendary Midnight Oil albums, DIESEL & DUST, BLUE SKY MINING and CAPRICORNIA.
THE MAKARRATA PROJECT is a themed mini-album of collaborations with Indigenous artists. Midnight Oil will donate its share of any proceeds it receives from this release to organisations which seek to elevate The Uluru Statement From The Heart in particular and Indigenous reconciliation more broadly.

After centuries of struggle for recognition and justice, 2017’s Uluru Statement called for the establishment of a ‘First Nations Voice’ enshrined in the Australian Constitution and the establishment of a ‘Makarrata Commission’ to supervise agreement-making and truth-telling between governments and Aboriginal and Torres Strait Islander peoples.

Clearly this mini-album has ended up being timely in ways nobody could have anticipated as the Black Lives Matter movement surges globally and renews local focus on Aboriginal deaths in custody. However, THE MAKARRATA PROJECT was actually recorded late last year after the band regrouped for a European tour. They entered the studio with about twenty songs of which seven revolved around themes of reconciliation so they decided to record that batch of material separately with a wide range of Indigenous collaborators (the rest of the new recordings are slated for a 2021 release).

THE MAKARRATA PROJECT will be the latest in a long line of reconciliation initiatives that Midnight Oil has supported. These include the band’s legendary Blackfella/Whitefella tour of remote Australia with The Warumpi Band in 1986 which inspired their global hit ‘Beds Are Burning’, their international touring with Yothu Yindi, the BURNING BRIDGES project, and the Oils’ hijacking of the Sydney Olympic Games Closing Ceremony when they controversially performed in clothes emblazoned with the word “Sorry”, adding further pressure in the campaign for an apology to the Stolen Generation.

Midnight Oil says: “We’ve always been happy to lend our voice to those who call for racial justice, but it really feels like we’ve reached a tipping point. We urge the federal government to heed the messages in the Uluru Statement From The Heart and act accordingly. Hopefully THE MAKARRATA PROJECT mini-album we’ve created alongside our First Nations friends can help shine a bit more light on the urgent need for genuine reconciliation in this country and in many other places too.”